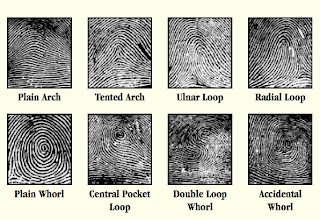 For most of us mystery, thriller, or suspense writers, one of the most common pieces of evidence left behind can be fingerprints.  Television dramas lace their episodes with them - the investigator dusts for them, scans them into a database to see if they can link them back to the unsub.  But how much do you actually know about them?
Fingerprints are also known as friction ridge prints.  The surface of the skin, actually from the fingertips to the wrist, is a "hornier type of skin" which is characterized by a system of papillary ridges.  It is these ridges that give us prints for tracking down individuals.
The Basics
Fingerprints are unique to every individual.  In fact, no two fingers, even on ourselves match another.
Our prints never change over the course of our lifetime.  Even if we damage the tissue, and the print may disappear for a while, once the wound heals, the print reappears.  Only in cases of severe damage to deeper layers of the skin would it prevent the prints from reemerging.  And then, any scars left behind make the print unique for tracing.
Fingerprints have 3 basic print patterns:  arches, loops and whorls.
Their History
The first discovery of fingerprints was made by Henry Faulds, a Scottish scientist, back 1880, but it wasn't until years later that it became a recognizable basis for evidence.
In 1911, fingerprints were accepted as evidence in a murder case, resulting in the conviction of Thomas Jennings in Chicago.
Latent Prints
These are the ones that are not visible.  They are formed by minute traces of sweat, either directly from the hands, or from unconscious contact with the face or another part of the body.  In fact, they weigh anything from 4 to 250 micrograms, and are about 99% water, the remaining 1% being a complicated mixture of substances that varies, not only from one individual to another, but from hour to hour in the same individual.
Collecting
Simple method:  print powders.  They come in a variety of colors and types.  The color chosen should provide the most contrast to the background surface.

Black (made from carbon or charcoal), and gray (made from aluminum or titatium) are used most often, but there’s also white that can be used when the background is dark.
For example:
Prints on glass, silver or dark surfaces are dusted with a light gray powder. / Prints on light-colored non-absorbent surfaces are dusted with black.
There’s also magnetic powders that can be used, and come in a variety of colors, as well.  These are used with a special device (Magna-Brush) that doesn’t have any bristles (like a brush would), and passes over the print without making contact.  It deposits the powder, and the print is revealed.
Once prints are revealed, they are first photographed, and then “lifted”.  Lifting prints is done by gently laying the sticky surface of a strip of transparent tape over the print.  The print pattern sticks to the tape, which is then peeled away and placed on a card for later examination and matching.
Other methods of lifting prints are:  Cyanoacrylate vapour (using a fuming chamber), iodine fuming, Ninhydrin, and Silver Nitrate.
With bloody prints, luminol can be occasionally be used for prints (although more helpful with larger patterned impressions such as shoeprints), but the glow doesn’t last long, so once the print is exposed it must be photographed.
Fingerprints can also be digitally enhanced if the print, or partial is unclear.  It can be scanned into a computer then subjected to one of many programs that can enhance and clean up a photo.
The Database
The FBI have more than 200 million prints, representing over 68 million people on file.  This database is known as AFIS (Automated Fingerprint Identification System).
Did you know?
Science has come up with a way to lift prints from clothing.  This can tell investigators, for example, if someone jumped off a building to their death, or were pushed.  It could help in solving rape cases where there's no DNA.  As M/T/S writers, this opens up an entire realm of possibilities.
Latent prints can almost be “permanent”.  They’ve even been taken from objects found in ancient tombs.
If the killer wears thin latex surgical-type gloves, the friction ridges still protrude and their pattern could be left on smooth surfaces if the glove is contaminated with blood, grease, paint, or some similar substance.  (Side note:  some killers have left gloves like this at the scene, and they’ve been turned inside out and prints retrieved.)
Criminals can be stupid...check this out....
A criminal breaks into a house, and brings with him a new package of gloves.  What he didn’t think about – the cardboard banding around them.  Investigators were able to pull a full print from there.
Spark Your Imagination
Get this...a woman was attacked, and she successfully beat the man off.  She was taken to the hospital for treatment, and during examination of her face and lips, the doctor noticed a fragment of skin wedged between two her lower teeth.  The woman recalled biting at the man’s fingers.  On immediate close inspection, police found a whorled pattern.
Hours later, a man with an injured finger was taken in for questioning.  He claimed he was injured at work, but his prints were taken including the injured finger.  A fingerprint expert was able to prove that the fingerprint taken from the man’s teeth exactly fit the missing area.
__
Information for this post taken from:
Howdunit Forensics A Guide for Writers by DP Lyle MD
Bodies of Evidences by Brian Innes
Forensics Friday