Read an Excerpt from Ties that Bind I Haven't Shared Before... 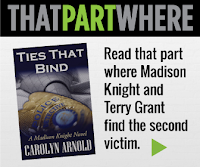 Ben Wallace has a brand new site for the purpose of showcasing "That Part Where", exciting scenes from author's books. I am honored to be a part of it and submitted a scene from Ties that Bind that I've never shared online before.

It's "That Part Where" Madison Knight and Terry Grant find the second victim.  Here's a little teaser, but you can catch the rest on Ben's site.

Chapter 27 from Ties that Bind
Madison couldn’t maneuver her way through the mass of lazy Sunday drivers fast enough.  And she found herself doing what she preferred not to do en route—speculate.  The fact there was another necktie of the same brand was too much to ignore.  That piece of evidence had never been released to the media so it ruled out a copycat.  It meant her inclination to believe Laura was an isolated incident was incorrect.  Were they looking for a serial killer?
Both victims were women.  Possibly because he could overpower them, or maybe he was wronged by a woman at some point in his life?  Assuming it was an emotional trigger, it must have been an incredibly personal wound to choose strangulation as his MO.  The killer may have something to prove, and with the tightening of the tie, he regained his sense of control, bringing with it liberation and a powerful release.  It was such an intimate killing method.  He would feel their last breath on his arms.  The thought sent a chill running through her.
She worried that the killer was escalating and becoming less inhibited.  He had risked exposure coming out from the seclusion of a house to a public place.
Terry had told her the body was found at the point where the trail went through Mitchell Park.  She recalled a parking area and headed there.  Pulling in, gravel crunched under her car tires, spewing dust into the air.  She caught a glimpse of a shiny reflection in her rearview mirror and realized it was Terry pulling in behind her.
She couldn’t see the body from the lot but a couple of uniformed officers stood at the edge of the woods.  There were also two young girls sitting on a bench.  From the body language she knew they must have found the body.  The one talked animatedly with one officer, the other leaned forward with her face cradled in her hands as she rocked back and forth.
“Hey Maddy.”  Terry performed a light jog to catch up.
She kept walking.  She was still mad at him.
“I didn’t pick sides.”
“Sure seems like you did.”  Normally he would attempt to smooth things over, talk it out, but he just shrugged and walked past her, headed toward the bench.  He must have already been having a bad day.
An officer came toward them.  He barely looked twenty.  “Her name is Heather Nguyen, age thirty-five, married.  Lives at 86 Springbrook Crescent, no children.  Holds down a job as a General Manager at Wow FX Incorporated.  They’re a special effects company for the entertainment industry.  Fog machines, snow machines, stuff like that.  Anyway, I’m FOS.”
“FOS?”  Madison asked.
“Yeah, first officer on scene.”  He said it like it was self-explanatory.
These recruits were getting younger, and the bar apparently lowered.  Before people knew it laughing would be replaced with saying LOL.  “Those two found the vic?”
“Yes about forty minutes ago.  Speaking of which you guys made it here pretty fast.  She’s over there.”  He pointed to where the trail rounded the bend and dipped down.
Read more on "That Part Where"
Excerpt Ties that Bind