By Carolyn Arnold May 23, 2011
For those of you who know me, and follow me on Twitter, you may be aware that I’ve been debating whether to pursue publishing traditionally, or take the plunge and self-publish.  With all the “buzz” on the internet, and after great consideration, I have decided to go ahead and self-publish.
I had asked myself, does this mean I’m giving up?  And, the answer is irrevocably no.  Self-publishing used to carry a type of stigma that somehow labelled the work as adhering to a lower standard, but things have changed.  Authors are taking pride in their work like never before, and just because of the increasing ease to self-publishing, they’re not allowing this to affect the quality.
In making my decision, I also considered the fact that just because a book is published traditionally it doesn’t mean that it will meet with success.  Many self-published books have received awards, honourable mentions, and have met with even more-than-modest sales.  In fact, there’s no real limitations on the success that can be experienced.  It only takes a solid-written book, and of course you, the readers to make that happen.
And am I scared?  Of course I am.  But I’m tired of letting it hold me back.  I look forward to hearing what you have to say once you get to read my novels.
Thank for all support and encouragement thus far.
I will keep you updated on the release date for my first mystery TIES THAT BIND, the first in a stand-alone series featuring Detective Madison Knight.  I hope to make it available on Smashwords, Amazon Kindle, and print-on-demand.
Meet Detective Madison Knight:
Madison never set out to be a Major Crimes Detective.  In fact, a childhood trauma that left her with a distaste for blood made that career an unlikely fit.  But inspired by a grandfather killed in the line of duty, and a grandmother who believed in her, Madison continues to work through this fear.  And, even though her mother would have preferred Madison married with a mini-van full of children, Madison is only married to one thing - her career.  She will stop at nothing to hold the guilty accountable, and find justice for their victims.
Here’s a peek into TIES THAT BIND: 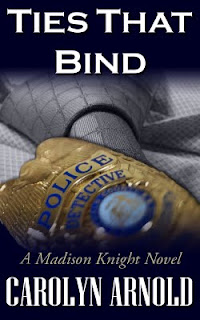 Detective Madison Knight concluded the case of a strangled woman an isolated incident.  But when another woman’s body is found in a park killed by the same line of neckties, she realizes they’re dealing with something more serious.
Despite mounting pressure from the Sergeant and Chief to close the case even if it means putting an innocent man behind bars, and a partner who is more interested in saving his marriage than stopping a potential serial killer, Madison may have to go it alone if there's not going to be another victim.
~~
To read the first chapter, click here.