It Has to Be Murder #SampleSunday 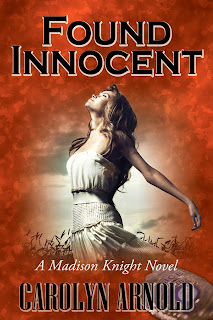 Sharing with you an excerpt from Chapter 3 of my latest release, Found Innocent (A Madison Knight Novel):

The shallow grave was in a garden that lined the property’s perimeter. The remains were on a black tarp to the side of the hole. Richards was braced beside the vic’s head.

Madison addressed him. “Higgins said it was a gunshot to the head that may be the cause of death.”

Richards looked up at her long enough to communicate his disgust that an officer would make that judgment. “I haven’t concluded yet.”

Normally Richards’s personality accommodated for some small talk and lightheartedness. Today he didn’t seem to be his normal self, although, Madison realized her approach could be what had changed the outcome. She had managed to insult his profession—something she had had no intention of doing.

“How long do you think she’s been in there?” She remembered Higgins had mentioned Richards’s assessment, but she would hear it firsthand.

Richards rose to his feet and squinted from the sunlight. “I’d say probably no longer than one month, but it’s hard to pinpoint exactly.”

Madison looked down at the woman. “First we need to figure out exactly who she is.” There was dried blood caked with dirt around her mouth. “Gunshot to the mouth.”

“Appears that way.” Richards bent back down and opened the vic’s jaw.

Madison looked inside her mouth. A few of the front teeth were broken off, likely from impact. “It looks like a small caliber. Like a .22.”

“If that’s the case, we probably won’t have a bullet to trace. It would have fragmented in her brain, especially at such a close range.” Madison noticed the muzzle burn around her mouth.

“Hopefully we can find the casing.” Terry looked around the yard.

“First, we’ll need the scene of the crime.” Madison kept her eyes on the woman. She appeared anorexic. Her hipbones extruded from under her skin. She made an assessment based on the demographics of the area. “Drug addict?”

“My first thoughts on the matter, yes, but I didn’t see any visible signs at first. Until…” Richards moved down the body and separated two of her toes to expose the center of them. There was a definite puncture mark. “This is where she shot up. I’ll be requesting a tox panel on her to narrow in on exactly what she was into.”

Madison noticed a rose tattoo on her ankle.

Richards pointed to abrasions on her knuckles. “It also looks like she may have been in a bit of a struggle. I don’t typically like to speculate. I’d say it looks like a suicide, but—”

“So she killed herself.” Madison glanced at the hole in the ground and back to Terry. “But how did she bury herself?”
~~
What to read more? Available for all e-readers, and in paperback. (Look inside the paperback below.)