Goals--Why You Don’t Reach Them 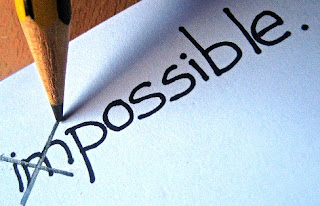 Why don’t you reach goals you set? Often times, the answer is you.

That’s right.  Think about this for a moment. The last goal you put in front of yourself--what was it? What kept you from reaching it?

Most of us set a goal and then think about the obstacles that may arise on our way to reaching it. We contemplate how we will overcome these. Possibly we dwell a little too long on the “overall picture” and, in concept, what an accomplishment it would be. Maybe we’ve run through it so many times that when we actually go to work toward it, we’re exhausted.  Then there are those of us who have a doubting attitude from the start. Well, it would be great “if”, but I’m not sure I’ll be able to do it.

Here I am speaking to you from experience! I had an “ah ha” moment the other day and realized why I don’t reach writing goals I set for myself.  See, it’s easy to pile on excuses. “Well, I have this book to edit.” “I have revisions coming back from my editor on this other book.” “I have to do some marketing.” “Formatting needs to be done.”...and the list goes on.  That’s not even including domestic duties (my house looks like a cyclone hit it lol).

But a couple of days ago, I set a writing target of 11,000 words for the day. I started out with a great attitude. I was going to do this. It had been so long since I had set aside a day to write and this was going to be the day.  How did it go?

Well, I went strong for four hours, or so, then the doubts started. “Oh, I can’t reach 11,000 words.”  I kept trying to squash the negative thoughts and energy down.  I took a forty-five minute break.  Then I got back onto the computer.  At this point it was early afternoon and I was sleepy (my dogs woke me up earlier than I had wanted). I started reasoning, well, I wrote 6,000 words, that’s great and I shouldn’t feel guilty about calling it a day.  I recognized the taunts for what they were--a reason to give up.  I wrote over a couple thousand more. Here, I was so close to my goal--less than 3,000 words from my goal. What did I do? Yep, I took another break.

In fact, I really didn’t think I was coming back to the manuscript that day. I went outside, watered my flowers, but the entire time one thing was gnawing on me. I was setting myself up for disappointment and discouragement. The only reason I wasn’t going to reach 11,000 words was because I said I wasn’t.

It was only 2/2:30 in the afternoon (thereabouts). I had three hours before my husband came home from work. What was I going to do? Set up under an umbrella on my patio and read a book?  No! I was determined to get those words in. I was no longer going to succumb to the doubts, or to the thinking that I had already accomplished enough that day.  I had set a goal of 11,000 words and I was going to reach it.  Guess what? I exceeded it! I came in at 11,137 words and finished up maybe a minute before my husband walked in the door.  I had done it!

What really kept me going? I visualized how I would feel when I accomplished my goal. I saw myself sharing it on my social media sites and inspiring others while they encouraged me. And, equally factored in was I didn’t want to disappoint myself by not reaching my goal. I saw the end result as clear as if I were living in the moment.

What can you learn from this?  Set a goal, and instead of focusing on the obstacles that could arise, simply focus on the target. Visualize the end result and how you will feel when you reach it. Picture yourself in that moment of accomplishment. Eliminate self-doubt and the taunting voice that says 'you’ve done enough already'.  Make it happen.
Carolyn Arnold Inspirational Motivation The Writing Craft Writing Exercise Writing Wednesday Writing Weekend