Your Mother's Going to Love this: #SampleSunday Tap Into Her Dark Side... 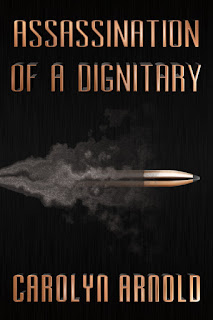 Assassination of a Dignitary by Carolyn Arnold
Buy on Amazon

Raymond Hunter's dark past has returned and demands one final favor. Now fifteen years later, settled as an accountant and family man, he assumed life would be calm. He thought wrong. The Italian Mafia wants him back.

The directions were simple: Kill Governor Behler and be out for good.

In order to protect his family and guard them from the truth, he has no choice but to accept the job. He picks the date and location—Niagara Falls, New York—two hundred and forty miles away. But by the time he returns home, he finds out the assassination attempt failed, his family has been kidnapped, and he has twenty-four hours to set things right if he wants to see them again.

With time running out, Raymond discovers the real reason they wanted Behler dead and finds out he’s placed himself and his family right in the middle of a mafia power struggle. What he doesn’t realize is that law enforcement is also closing in.

I stood in the cover of darkness, tucked into a corner untouched by the glow of a street light or motion-sensor spotlight.  The house was a two-story brick but only home to one man.
A man stood vigil in the corner of the porch.  There would be at least one more out back.  If Christian hadn’t changed, both men would be carrying AK-47s.
But there would be no need to disturb them.
My heart fluttered with the adrenaline rush that used to fuel my soul on a regular basis as I contemplated the ascent to the second floor.  There were two large windows that would serve as a means to propel myself upward.  The brick’s mortar had become deeply inset over the years and allowed for a good toe hold.  I could have done things the easy way: placed a call and accepted the mission.  But I needed to prove that I wasn’t one to mess with either.  He violated my home; I would his.
I hoisted my legs onto the bottom window sill and spent a moment thankful I had kept in good physical shape.  I stood there, braced in front of the window, back to the world, vulnerable.  I heard something ruffle and realized the two guards were moving around.  I froze there while I struggled to study their movements by sound.  My heartbeat thumped in my eardrums and made it hard to hear.  I had to recall my breathing technique.  I had to tell myself that I had nothing to lose, just like before.  But so much had changed since then.  Brenda’s and the kids’ faces skipped through my thoughts, and I closed my eyes willing them to obscurity.
The men were still moving around.  I strained to hear.  As I focused, my heartbeat relaxed in my ears and receded into a dull hum.
“Carlos…pssstt Carlos.”
“What are you doing man?”
The second voice sounded paranoid and at unease.  Either he hadn’t been a soldier, or grunt, for long or he had been witness to Christian’s evil side.
“He’s sleeping man.  Relax.”
“Go back to your watch,” the one named Carlos said.
The more they spoke and the more they moved around, I feared they’d do a full perimeter search.  If they did, I would be dead.  One bullet to the back of the head, and I’d be fed to Mitchell, Christian’s pit bull.  At least that’s how the lucky intruders were disposed of in the past.  Betrayers of The Family never received the courtesy of the gun shot first.
Mitchell had likely passed, but Christian loved the breed and would have replaced him with a younger, hungrier version.
They’re good at tearing flesh from bone, he told me.  Anything that can do that is worthy of my respect.
“You ever been to Popeye’s?  The girls are hot.”  The chatty soldier was from the front door.  This much I could tell.
“Please go back. Go.”
I heard the man return to the front, his feet crunching on the crushed shell driveway that Christian had demanded be shipped specifically for show.  Standard gravel would never suffice for a man like him.
I let the rush of air leave my lungs.  I placed my gloved hands on the brick and worked the toes of my shoes into the deep groves.  I made my way to the second story like a modern day Spider-Man.  As I reached for the sill of second window, I paused and listened.  My toe went into a slot, and I extended upward as far as I could reach.  I needed to go up another few bricks in height.  My hand reached the sill, but as I went to pull myself up, my grip slipped.
Shit!
I was hanging suspended, fifteen feet off the ground, by one arm.  I needed to maneuver my legs to the side, get them into a toe hold.  My body lost all willpower to move when I heard rustling in the bushes.
Shit!
My arm was aching like a son of a bitch.  The push-ups and bench presses at the gym hadn’t prepared my muscles for this workout.
I summoned my thoughts to go somewhere more tranquil.  They instantly jumped to Brenda—the smell of her perfume and the warmth of being in her arms.  The recollections weren’t helping as my resolve weakened.  I needed to rediscover the killer inside of me, and it wouldn’t come from thinking of my family.

Buy on Amazon
Assassination of a Dignitary Sample Sunday