#SampleSunday Justified - A Look at Madison Knight's softer side... 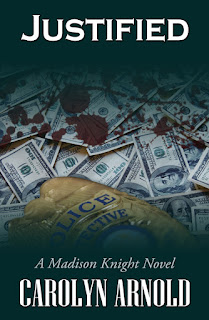 Madison Knight should have ignored the call. Now she is spending Christmas Eve dealing with her least favorite thing...blood and lots of it.

When a female victim is found in her home it has Madison and her partner tapping into the vic's personal life. With a rash of former business partners and lovers, all of whom wanted her dead, there are not enough hours to question them all.

But trying to find the person who had the most motive isn't all that's on Madison's mind. As she struggles to establish balance in her own life, she knows she has to get her focus back. Justice requires it.

Excerpt of Justified (A Madison Knight Novel)
Taken from Chapter 4:

By the time Madison walked into her apartment, it was well after midnight.  Her mind mulled over the facts in the case but stalled at the thought of all the blood.
She blamed her distaste for blood on her childhood, and Chelsea’s ambition to climb an oak tree, which resulted in her falling to the ground and getting herself a compound fracture.  Madison was only ten at the time, and the blood seemed to pour out of her younger sister’s leg endlessly, rendering Madison helpless.  Now every time there was a bloody crime scene, the memory came flooding back.
Her answering machine flashed two new messages.  She pushed the button.
“You have been selected for a one week Caribbean cruise—”
Delete.  Next.
“We wish you a Merry Christmas.  We wish you a Merry Christmas…”  She dropped onto the sofa and closed her eyes while she listened as her sister’s and nieces’ voices filled the apartment with some seasonal cheer.
Picturing their faces made her smile, but the images transformed without warning to the horror she saw tonight.  Her eyes opened with the realization that Claire Reeves had died alone.  It turned out she didn’t have anyone on record as the next of kin, and in addition, Claire had a counterfeit best friend—based at least on Allison’s statement.  What Claire did have, though, was a lover—at least one.  But was it he who killed her?
It was too early to tell, but Madison would find out.  She’d have to put her personal melancholy aside and get the job done.  Now if she could only get the blood—its smell and its appearance—out of her senses and get some sleep.
“Yeah…Merry Chris…mas.”  She spoke aloud to herself, her words fragmented by a yawn.

Would you like to read more?  Justified is available on Amazon for Kindle and in Print.
Amazon US
Amazon UK