#SampleSunday Inside the Killer’s Mind: Ties that Bind (A Madison Knight Novel) 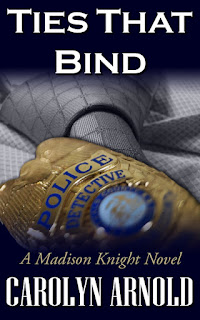 Detective Madison Knight concluded the case of a strangled woman an isolated incident. But when another woman's body is found in a park killed with the same line of neckties, she realizes they're dealing with something more serious.

Despite mounting pressure from the Sergeant and Chief to close the case even if it means putting an innocent man behind bars, and a partner who is more interested in saving his marriage than stopping a potential serial killer, Madison may have to go it alone if there's not going to be another victim.

Excerpt of TIES THAT BIND (A MADISON KNIGHT NOVEL):

He sat there, in his 1995 Honda Civic, sweating profusely.  Its air conditioner hadn’t worked for years.  A real piece of shit actually but perfect for the crappy life he had going.  He combed his fingers through his hair and caught his reflection in the rearview mirror.
Last night had changed him—whether for the good or for the bad remained to be seen.  All he knew was his eyes had changed, revealing the darker side of his character.  He rolled his shoulders forward in an effort to dislodge the growing tension and took a cleansing breath that brought with it a waft of the cigarette that burned in the car’s ashtray.
He had parked down the street close enough to observe the activity at 36 Bay Street yet far enough away to be left alone.  At least he had hoped so.  Cruisers were parked out front of the house, and about forty-eight minutes ago, a department-issued SUV pulled to a quick stop.
He picked up the cigarette, tapped it in the ashtray.  He took pride in getting all this attention for his work.  Statistically it was nothing special.  Another dead young lady.  People would move on.  They always did.
It was the city’s thirtieth murder of the year.  He knew this only because he had been brushing up on his statistics.  He was just like that, a gatherer of facts, of useless information.  But maybe someday his fact-finding and attention to detail would prove beneficial.
He wiped his forehead.  The sweat trickled down and stung his nose.  It was still tender to the touch.  The old man at the bar had a strong right hook.  He closed his eyes for an instant.  When he opened them, a Crown Vic pulled to a stop in front of the house.  He straightened up.
A woman of average height, probably about five-five, with blonde hair walked toward the yellow tape.  But her looks didn’t have his attention.  It was her determined stride that garnered his respect.  And she looked familiar to him and now he knew exactly why—Detective Madison Knight.
She had made headlines for putting Russian Czar Dimitre Petrov behind bars, but the glory didn’t last for long.  His power couldn’t be weakened and the detective proved powerless to stop another murder.
He felt flattered with her on the investigation.  An adrenaline rush built within him.  He could feel the energy in his veins, his heartbeat pounding in his ears, and the subsequent strain to draw in a satisfying breath.
Tap, tap.
Knuckles against glass.  His driver side window to be exact.  He felt his heart take pause, his breath shorten further, as he surmised who it would be.  Slowly lifting his eyes to look at the intrusion on his reflections, his suspicion was confirmed.  It was an officer.
Stay calm, play it cool.
He drew the cigarette to his lips and took a drag on it.  Damn, his nose hurt so much when he sucked back on it, he had to fight wincing.  Leaving it perched between his fingers, he directed his attention to the cop who motioned for him to put the window down.
“I’m going to have to ask you to move your vehicle.”
Good thing for his dark-tinted glasses or maybe this cop would see right through him.  “Sure.”  He could feel himself shaking.  More adrenaline now infused with fear.
“Are you alright sir?”  The police officer bent over, looked into the car.
Following his gaze to the unsteady hand holding the cigarette, he forced himself to raise it for another drag.  It shook the entire way.  “Yeah, I’m fine…”  Her lifeless eyes flashed though his mind.  He coughed for the dual purpose of clearing his throat and for the hope it would somehow dislodge his recollections.  “Sure…I…I’ll get out of your way immediately.”
The cop’s facial reaction made him nervous.  Had he seen through the entire façade?  Was his guilt that obvious?
“All units confirm a secured perimeter.”  The voice was monotone.
The officer ignored his radio.  “What happened to your nose?”
What was this uniform out to prove?  He forced another cough, attempting to re-direct the conversation.  He made himself take another drag and form-pressed a smile to conceal the pain.  His words escaped through gritted teeth.  “Bar fight.”  He tapped the cigarette in the ashtray.
The officer nodded but didn’t look too convinced.  It felt like the man’s eyes were condemning him.
“I need you to move your car.”  The officer’s flattened palm drummed on the roof.  “And try to keep yourself out of trouble.”
Too late, Officer…too late.

Would you like to read more?  Ties that Bind is available on Amazon for Kindle and in Print.
Amazon US
Amazon UK
Sample Sunday Ties that Bind