#SampleSunday An Excerpt of Sacrifice, A Madison Knight Novel 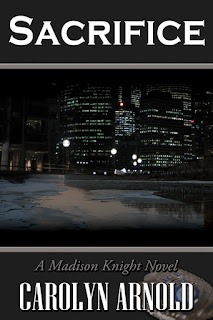 When the son of business tycoon Marcus Randall washes up on the shore of the Bradshaw River, Detective Madison Knight must sacrifice everything--including her career--to find justice for the "perfect murder".

With Randall already on the radar of the Secret Service for fraud and counterfeiting, the investigation sheds new light and they require the full cooperation of the Stiles PD. But with power and money to back him, Marcus has a reach that extends right inside the police department.

If Madison's going to find out the truth, she'll have to sort through the lies and balance diplomacy with politics.

“You’re sure?  File 83457923?”  Chief McAlexandar sat in his city-appointed chair bought by the votes of the people, as if he were royalty.
looked at him blankly, viewing his questions as rhetorical.
McAlexandar leaned across the mahogany desk, bent at the elbow, the one finger wagging at Sergeant Winston.  “I don’t like the way your girl is looking at me.”
The four of them—the two superiors, Terry, and she were pressed into the Chief’s fancy office.  Only top end office furniture adorned the room.  Expensive carpet, recently installed, modernized the space and complimented the mahogany cabinetry.
Sergeant Winston sat across from the Chief.  Madison and Terry remained standing.
His office was on the fifth floor, on an outside corner, allowing windows to frame two of the four walls.  The sun was bright and glistened off snowflakes as they fell.
Winston passed a glance to , but instead of silencing her, it prompted her to speak.
“We need to know who he is.  He is dead.  His family has a right to—”
“Yes, I realize that.”  McAlexandar’s temper was evident in the tone of voice, the reddened cheeks, and the intensity in his eyes.
noticed something else hidden there.  The Chief knew the person behind that specific file number, and her guess was quite well.  “Who is it?”
His eyes went from to her boss.
“Knight.”  Sergeant Winston silenced her with a look.
The room went quiet but thundered with the questions that weren’t being voiced or satisfied.
Who was this man in the morgue?  What was his connection to the Chief?
“I want to be the one to tell him.”  McAlexandar drew his hands down his face.  The action brought attention to both his age and the deep-set creases on his forehead.  He leaned back in his chair and swiveled side to side.
“Chief, this would give us a place to start, an ID.  We could establish timeline, the situation surrounding his death—” Her words stalled with the eye contact he gave her.  She stepped back again, looked at Terry, let out a puff of air, and rolled her eyes.
“The file belongs to Chris Randall—”
“The Chris Randall, as in business tycoon Marcus Randall’s son?”  Terry’s words were animated, but the Chief’s unimpressed look squashed his excitement.
Marcus Randall owned the largest investment firm, not only in Stiles but the entire state.  The man was worth billions of dollars and that was after the economy hit of 2008 when the markets plunged.
“We’ll need his file unlocked.”  Madison’s mind was calculating how the Chief knew from simply a file number who it belonged to.  She wanted to ask what Randall meant to him.  A discrepancy that stood out to her was the pendant with the letters CC.  If it were in fact Chris Randal, shouldn’t it be CR?
“This situation is to be handled delicately.  It must be kept from the media.”  The Chief’s beady eyes steadied on Winston, a finger pointed at him.  “I will notify Mr. Randall myself.  How did he die?”
“Exact cause of death has not yet been confirmed,” the Sergeant answered.
“I would think that would be a terrific place to start.”
“It seems to be a drowning, but Richards is waiting on the tox results,” said.
The Chief wagged his finger again as he spoke to Winston.  “Get things moving on this.  Rush the results.”  He swiveled to look out the windows, lowered his voice, and mumbled some words.
thought she discerned something to the effect of, what was he going to tell him now.
He turned back around.  “Now as far as accessing his file, it was closed by court order and will remain such until a court order releases it.  But seeing as he’s dead, that should be the least of our problems.”  He paused.  “I can’t believe it.”
The thought went through her mind again.  Exactly how personal was the relationship between the two men—Marcus Randall and Chief McAlexandar?  And if they were as close as it seemed, how could she allow him to visit the father alone?  What if he was involved somehow?  The relaying of that news was pertinent to reading and gauging the relationships of the deceased.  The Randalls, no matter who they were, or how much they had, shouldn’t be exempt from that.
“I will get started on releasing the file.”  Winston stated the offer, and the Chief nodded authorization.
“Chief, if I may,” started mildly, trying to pull from an inward quality buried deep within her.  “It’s important that we be there when you relay the news.”
Seconds passed.
“We need to gauge his relationship with the deceased—”
“The boy’s own father.”
She remained silent, but kept steady eye contact.
“And you’re questioning my ability to do so.”  He had a way of phrasing questions like statements.
“I’m n—”
“Then what do you question, Knight?”
It was rare for her to feel pressured, but the situation presented was delicate.  She needed to speak her feelings aloud.  “You’re close to the Randalls?”
McAlexandar clenched his jaw in a manner she had only seen a few times.  It normally came just before a suspension.  She knew that from being an eyewitness to a couple of altercations.  He had been Sergeant prior to Chief.
“You can come with me.”  He directed his next comments to Sergeant Winston.  “But if she says one word, I’m telling you, one word outta line, she’s finished.  You hear me?”  He paused letting the seriousness of his words set in.
felt slightly nauseated because she knew her ability to stay quiet was nearly impossible.

With them out of the room, McAlexandar opened a desk drawer he hadn’t looked into for some time.  Up until now, he had always possessed the strength to refrain.


He looked at the bottle of scotch that lie on its side and put a hand on it.  Some might consider it foolish for a recovering alcoholic to keep a reserve so readily accessible.  He viewed it as instilling character.  What good was a test if it wasn’t before you?  All he could think now was that maybe he didn’t know Marcus Randall as well as he thought.
That night at the Lounge, Randall was sketchy as to the details of what he needed help with.  He just said the time was coming soon and that he’d be notified.  Was that time now?  Did he murder his own son?
And with at his side, he would have to deal with her prying curiosity as well.  He had to take her out of the equation before his world came crashing in on him.

Would you like to read more?  Sacrifice is available on Amazon for Kindle and in Print.
Amazon US
Amazon UK