#SampleSunday An Inside Look at Eleven, an FBI Novel 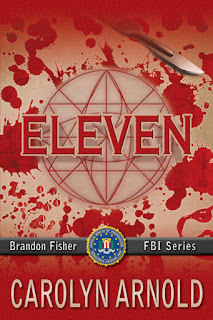 Nothing in the twenty weeks at Quantico prepared Brandon Fisher for this.  His first case as an FBI agent with the BAU takes him and his team to the small rural town of Kentucky where there’s been a startling discovery.

Buried beneath a house is an elaborate underground bunker with eleven rooms and ten bodies.  Stranger still is the one empty grave that taunts for an eleventh victim.

With the remains dating back a couple decades and the most recent being within the last few years, they know there is more than one killer at work.  The property owner was already serving a prison sentence on a fluke charge of slaughtering cows.  Now their main concern is the killer who roams free, making it necessary to negotiate with one killer to catch another.

Yet when the course of the investigation touches close to home, threatening the lives of those he loves, Brandon fears he's become the target of a psychotic serial killer who wants to make him number eleven.

Would you like to read more?  Eleven is available on Amazon for Kindle and in Print.
Amazon US
Amazon UK
Eleven Sample Sunday