A Charity that is Close to My Heart 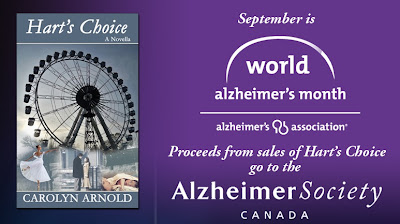 September is World Alzheimer's Month, and I thought what better time would there be than this to release my novella HART'S CHOICE.  Proceeds from the sale of this book are going to the Alzheimer Society of Canada--but not just for the month of September, ongoing.

When a character calls out to you from the realm of your imagination and insists you tell their story, it’s like magic.  Nothing can beat the rush that comes with the exploration of new characters and their world.  True fun also comes into play when these revelations take you in an unexpected direction from what you normally write.

This happened to me with Tessa of HART’S CHOICE.  What had began as a short story became a novella and has the potential of one day becoming a full length novel—a project I may revisit.

My wish is that all can enjoy this story of life, with its highs and lows, celebrations and losses.  I hope you find this story as touching as I did and love the journey.

Please also know that all proceeds from the sale of this novella will be donated in memoriam of my father-in-law, William Arnold, to the Alzheimer’s Society of Canada.

Donate Directly, and/or buy your copy of HART'S CHOICE to support this worthwhile cause and get a story I just fell in love with while writing it. 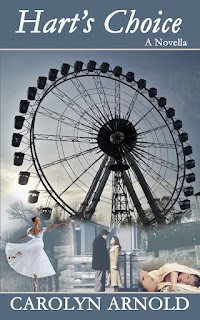 For the lucky ones, there is a love so powerful that when it comes along, it changes everything.


As teenagers, just a chance meeting at a county fair, would change Barry and Tessa's lives forever. Yet with a summer romance that didn't fully blossom and ended without warning, two hearts were torn apart by time and circumstance.

Tessa pursued her love of dance and found herself a ballerina in the 1962 production of The Nutcracker in New York City. But she still thought of Barry.

Reunited nearly a decade later, only to be ripped apart by war and loss, Tessa wonders if they will ever be together and dreams fulfilled.