Sacrifice, the 3rd in the Madison Knight series, is Here! 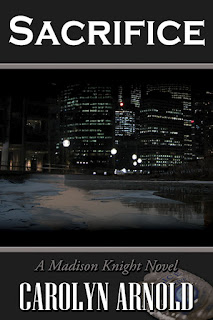 I'm proud to announce that the third installment of the Madison Knight series, SACRIFICE, is now available for Kindle.  The paperback version will follow shortly.

Although, I had anticipated releasing it back in June or July, I think it will have been worth the wait.

Here is what some pre-reviewers have said:

“If you’re a fan of Law & Order and Rizzoli & Isles, then dive into the Madison Knight Series...It’s a fast-paced, fun and absorbing ride...”

Here's the book blurb:
When the son of business tycoon Marcus Randall washes up on the shore of the Bradshaw River, Detective Madison Knight must sacrifice everything—including her career—to find justice for the “perfect murder”.


With Randall already on the radar of the Secret Service for fraud and counterfeiting, the investigation sheds new light and they require the full cooperation of the Stiles PD. But with power and money to back him, Marcus has a reach that extends right inside the police department.
If Madison’s going to find out the truth, she’ll have to sort through the lies and balance diplomacy with politics.
Buy on Amazon


Prologue
He equated his past deeds to shades of gray with no distinction between black and white, right and wrong, good and bad.  He knew others would see things differently, but it didn’t matter.  Few people possessed the ability to intimidate and influence him.  The man he was meeting had the power to do both.
He walked into the dimly lit Fairmont Club, and as he followed the maître d’ to a back table, he inhaled the smells of grilled steak mingled with imported cigars.  Appreciatively, he watched her hips sway as if she put extra effort into it.
“Patrick, how nice of you to join me.”  The man in the pressed Armani, with whom very few conversed with on a first name basis, sat at the table.  A glass of Louis XIII Black Pearl, priced at fifteen hundred an ounce, was in front of him.
Patrick noticed the man’s bodyguard sitting at a nearby table.  He was Armani’s prized stallion who instead of being stabled was toted about and showcased.  The man went by Jonathan Wright, but Patrick doubted that was his real name.  He was super intelligent and an ex-marine.  Wright nodded his approval and went back to his steak and red wine.
Another young woman, a potential Asian model, stood at the edge of the table.  “Your regular, sir?”
“French with a twist.”  Patrick smiled at the waitress remembering the feel of her skin and the smell of her musky dew.  Although a married man for thirty years, he didn’t think his wife had noticed him missing that night.
A few minutes later, the waitress came back with his Perrier water and lime in a rocks glass.  The weight with which she set it on the table told him her memories were back, but she had to act like a civilized woman; after all she was working.  She had to know, with a body like hers, she begged men to take advantage of her.  He still believed he could have her again, if he were at all inclined.
Armani held up his glass in a toast gesture before swirling it lightly and taking a deep inhale.  He followed with a small draw on the cognac.  “When are you going to join me and have a real drink?”
“I’m on the job.”
“Time for that new chair, my friend.”
“Is that why you called me here?”  Patrick smiled.  Maybe the time had come to be repaid for past favors?
Armani let out a laugh.  “Hardly.  I need your help with something.”
Patrick’s heart palpitated with adrenaline as it did every time this man made that statement.  It was too late in his life to change to one of innocence.  Should his past deeds ever require an accounting, his only option would be a bullet to the brain.  “You name it.”
Armani played things smart, though.  He always reminded him of the stakes involved first.  “You help me with this and I’ll ensure you make Mayor.”
Chapter 1
The pungent odor hit instantly upon opening the morgue doors.  She pinched the tip of her nose, but it did little to save her from the smell of decomp becoming embedded in her lungs and sinus cavities.
“Whoa, he’s a ripe one.”  Terry, her partner, stepped through the doorway behind her.  He grabbed for a cloth mask from the dispenser mounted on the wall, and handed her one.
Cole Richards, the ME, stood by the body as a tall, dark guardian.  He kept his eyes on the body as he spoke.  “It’s the exposure to the air accelerating the putrefaction process.  This is why the autopsy must be done tonight.”
noted Richards spoke with his eyes on the dead, an unusual thing for him.  Maybe something about this death touched him on a personal level?  She looked from Richards to the body.   Read more on my website, or download the book for Kindle here.