Do Your Characters Have an Inner Tormenter?

Most of us have things we reach for when we’re under stress.  We may not even realize we do so, or that we have these certain habits.  If I asked you to think about what the case is for you, what would come back with? 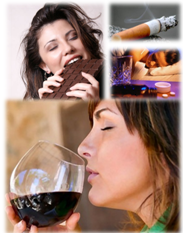 Do you seek comfort in:

And potentially it could be a number of the things listed above depending on the motivating circumstances.  These habits, or “vices”, are usually the result of an underlying emotional condition.  Another noteworthy point, is some of these things do not even need to be done to access.  For example, alcohol.  A bad day can have you reach for a glass of wine, or it may be more extreme such as a bottle of wine, or maybe you drink everyday.

Now while this isn’t a discussion on having people examine their lives (although it’s not really a bad thing to do periodically), it does help in strengthening our characters on the page.  After all, the more you know about yourself and understand people in general, the better you can understand your characters.  How so?

For the most part, I think we tend to look at the motivation and then the effect.  For example, Joe is upset because his girlfriend said no to his proposal.  He’s heartbroken but his pride refuses to admit such.  However, it’s demonstrated in his sudden need to party, drink, and possibly sleep around.

This seems straightforward, but what if we’re coming at it from the other direction?  In writing, if you’re like me, your characters have a life of their own.  You may have a character that acts a certain way, or has habits and have no idea why.  It may have just come naturally to the character as you wrote the scene(s).  But think:  if you stop and look back, dig deep into the character’s psyche, how much stronger will that character become?  Root out their motivations, the buried feelings.

I guess it’s a relatable situation to that of, what came first the chicken or the egg?  If you meditate on character motivations and backgrounds, you’ll find that they are inseparable from reactions, vices, and/or habits.  Just as you need a chicken to lay an egg, you need an egg to make a chicken.
Human Observation Project The Writing Craft