Come On, Speak Your Mind 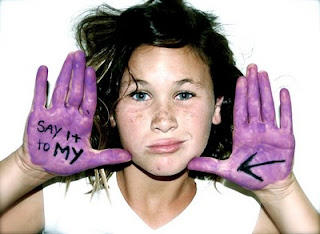 Isn't it true there are a lot of things we think to ourselves but don't verbalize to the world around us?
Sometimes we confide our true feelings in those close to us but not all the time.  There are things we think that race through our minds as a quick response to a given situation, then there are things that brew over time.
What about you?  Ever think something you'd never dare to verbalize?  I know I have.
And let's admit it, if everyone went around speaking their true feelings and opinions on things the world could be a pretty nasty place, yet at the same time maybe it would make for a peaceful state of existence?  I guess it would all depend.
But what about the characters we write, or the characters we read about?  Do we want them to say everything they think or feel, or does part of the internal conflict not in fact come from their inability to verbalize these things?
Maybe we have a character that is too proud to say sorry, even though they would do anything to mend a relationship.  Pride won't let them communicate their apology.
Maybe we have a character who loves someone but would rather walk through the desert than admit their true feelings, as if it's a weakness.
Maybe we have a complex character who cares too much about things going on around him/her but the other characters in the book would never pick up on that.

Maybe we have a character that doesn't really care for someone else but is too polite to verbalize their true feelings.
Anyway, in my opinion, I believe this human complexity has a definite place in the novels we write, and the novels we read.  And rarely do true feelings demonstrate themselves in a statement, it's something people show, it's energy, it's mannerisms.  Harnessing this aspect in novels makes the characters relatable.  What do you think?
Human Observation Project The Writing Craft