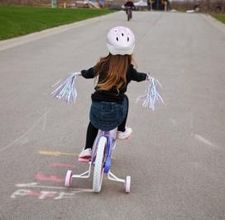 Cassie stepped through the door to the garage with her father following behind.  She only wanted one thing that summer.  She wondered if her father had been listening.
Her eyes widened when she saw it only feet away.  She closed the distance with a run.  “A bike!”  She let the handlebar streamers filter through her fingers.  They were her favorite color too, pink and purple.  They matched her bike.  Her hands traced from the bars to the seat to the back wheel.  She would ride it all summer.
“Do you like it?”  Her father stepped closer.
“I love-”  Her hands stopped moving when she noticed the back tire.  It didn’t look like her older sister’s bike.  She cast a glance to the side of the garage where Tiff’s bike was leaned against the wall.  “What are those?”  Cassie pointed back to her bike and the two small wheels coming off either side.
“They are called training wheels.  Those are to help you keep your balance.”

“Tiff doesn’t have them.”
“She’s been riding for a long time but she had them on her first bike too.”  Her father hunched beside her and placed a hand on her back.
“Serious?”
Her disappointment melted with her father’s nod of reassurance.  She smiled.  “Can I go for a ride?”
“Of course you can.”
Her father grabbed her helmet and put it on her head.  As he worked on the clasp, she looked in her father’s eyes.  “Why must I wear this?”
“It’s to protect you in case you fall.”
“You think I’m going to fall?”
Her father laughed but she didn’t see the humor in it.  “We all fall Cassie, many, many times in life especially when we’re starting out with something.”
She studied his face as he finished securing the helmet.
They spent the next hour together.  It was a lot harder than it looked when Tiff and other kids in the neighborhood rode.  She’d lean to the left and then lean to the right.  She became thankful for the guidance of the training wheels, and her father’s close attention.
The next day they started out again.  Today things were easier.  She didn’t lean so much to either side.
“I think you’re ready.”
“Ready?”
“Yes.  Let’s go home and I’ll make your bike look like Tiff’s.”  Her father smiled at her.
She pedalled hard.  Her father jogged to catch up.
After he had the training wheels off, he said “Now this is a going to be a real challenge.  I’ll be right by your side but we’ll take things slow.”
His warning sank in and she nodded.
“Alright then.  Let’s go.”
Her father let go for only an instant.  Cassie thought she could handle it on her own.  Her father couldn’t stop the fall.  The sidewalk kissed her skin.
Tears running down her face she didn’t know if this riding a bike thing was for her.
“You’ve got to get back up again, Cassie.  Come on.”
“I...don’t want...to.”  Sniffles fragmented her words.
“We fall down in life many times.  We have to get back up.”  He held out a hand for her to take.
The first time her father let go she screamed.  He talked to her and told her she could do this, that he believed in her.
As the afternoon went on, he’d let go for longer periods of time until she didn’t need him to steady the bike anymore.
“I’m doing it!”
“Yes, you are.”  Her father trailed behind her as she rode.
She spent the rest of the summer on that bike.  It was the best summer ever.
Now, twenty years later Cassie had a gift for her daughter.  “It’s in the garage honey.”
“I hope it’s a bike.”
Cassie just smiled as she let her daughter lead the way.  As her daughter’s hair fanned on the way by, Cassie remembered her first bike and the summer her father taught her to ride.  He had told her, you have to be a bad girl to ride a bike.
He explained bad stood for Balance, Adjustment, Determination and Discipline.
For years she thought bad was spelled with two D’s.  Cassie smiled at the memory as she realized how riding a bike applies to everything in life.
When we start out, we need guidance – the training wheels of life.  New endeavours are scary and can be overwhelming.  We need to rely on others.  But even when we push people away, some times support systems come from seemingly nowhere.
We all fall many times, and yet despite the busted lips and scrapped knees we keep getting back up until riding a bike is easy.  In life we’re going to experience setbacks and failures.  It’s up to us whether we get back up again.
Knowing that we’re going to fall, we take precautions – a helmet when riding a bike.  It should be no different when we set out in a new endeavour.  Accidents happen, things get set off course.  Do we adjust?
Her father couldn’t be there to catch her every time she lost her balance.  And sometimes no matter how supportive people are, there are times they may let us down.  Do we forgive them?
Are we determined to reach our goals in life and disciplined enough to see them through?
“Can I go for a ride mommy?”
“Of course.”  Cassie smiled again at the memory of a wise man who had taught her so much more than how to ride a bike.  Despite the fact she lost him lost year to cancer, she would never forget him.
“Mommy’s coming.”
Inspirational