By Carolyn Arnold August 04, 2011
Marion Sipe is a writer, poet and artist. Homeschooled, she spent her youth flitting around the country and writing it all down. Her fiction has been published in Alienskin Magazine, Alternatives, and the Flash! anthology. She currently resides in Austin, Texas with her vicious guard cats and handsome prince.
Tell us 5 Random Things about you the person, not the author:

1.  I occasionally knit, but I'm very bad at it.
2.  I'll (finally) be moving home to New Orleans in January.
3.  I want to go skydiving for my fortieth birthday (in 10 years).
4.  I want to grow my own mushrooms, when I have the room.
5.  I am deeply fascinated by invertebrates (especially cephalopods) and fungus.
Favorite Authors:
Garth Nix
Lynn Flewelling
Patricia Wrede
Fiona Patton
Terry Pratchett
Where people can find you online:
Twitter
Facebook
Blog Address
Goodreads
Tell us about your book:
Name : A Sign in Blood
Genre: : Fantasy
Length: : 165,000 words
Formats Available: : Kindle, Epub, PDF, LRF, RTF, PDB
Book Blurb: 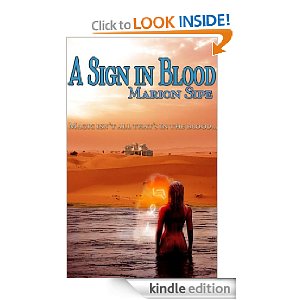 While investigating her father's murder, Chadri never meant to get involved in politics.  She arrives in Mesaceal with her mentor Nathias and a wild talent for blood magic, but soon finds it won't be enough to stop a brutal attack on her family home.  After befriending a queen who is forced to fight to win her crown, and learning of rumors about the theft of a sleeping god, Chadri is caught up in a web of conflict spanning two nations. Trapped within the tightening threads, she must unravel the secrets surrounding her father's death, or die the same way he did.
Where to buy:
Amazon
Smashwords
__
The Independent Voice does not endorse, nor necessarily have I read or reviewed the books displayed.  It is merely a means for authors to let you know about them and their work. If you are interested in being featured in a future post for The Independent Voice, click here to fill out the form.
Independent Voice