By Carolyn Arnold July 10, 2011
Today's #SampleSunday comes from TIES THAT BIND, chapter 25.  It shows a personal side to Detective Madison Knight.
Chapter 25 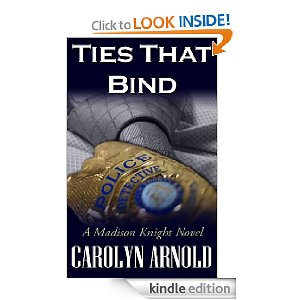 Detective Madison Knight concluded the case of a strangled woman an isolated incident. But when another woman’s body is found in a park killed by the same line of neckties, she realizes they’re dealing with something more serious.
Despite mounting pressure from the Sergeant and Chief to close the case even if it means putting an innocent man behind bars, and a partner who is more interested in saving his marriage than stopping a potential serial killer, Madison may have to go it alone if there's not going to be another victim.
Available to buy in E-book or Paperback:
Amazon US / Amazon Canada / Amazon Kindle UK / Amazon Germany
Barnes & Noble
Smashwords
Sample Sunday