By Carolyn Arnold June 30, 2011
Jane George lives in the San Francisco Bay Area with her family and is a life-long appreciator of the sublime and the absurd. Jane also has a BFA in illustration and has received honors from the Society of Illustrators in New York and from San Francisco Society of Illustrators.
Tell us 5 Random Things about you the person, not the author:
1) I like tapioca even though it feels like swallowing slimy little eyeballs.
2) I lived in the East Village when I was twenty, twenty-one.
3) I didn't particularly like circuses until I started writing about one.
4) Most of my story ideas come in the form of dreams.
5) I finally made it to college at the age of thirty-two.
Favorite Authors:
Jane Austen, Dick Francis, Annie Proulx
Where people can find you on the web:
Twitter
Facebook
Blog Address
Website
Goodreads
Tell us about your book:
Name : The Mumbo Jumbo Circus
Genre: : Young Adult Fantasy
Length: : 336 pages
Formats Available: : Print, Kindle, Nook Book
Book Blurb: 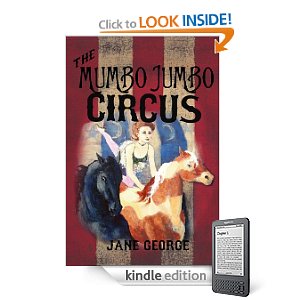 When the enigmatic Ringmaster asks 15-year-old Evanja (Evan) Leane to run away and join the circus, she says yes. Anywhere s got to be better than foster home Number Eight. Evan learns that this ragtag circus, a haven for throwaway teens, relies on more than spectacle and illusion. This circus is built on magic. Each of the teens possesses a donvrai, a true gift, that manifests only in the presence of the Ringmaster s mysterious Ju-Ju. Unlike many of the other teens who must wait for their donvrai to emerge, Evan s gift surfaces on her first night: she can read horses minds. This would be totally awesome except she has been deathly afraid of horses since foster home Number Three. But circus is a dying art. If Evan wants to save her beloved new-found home, she must concoct a brilliant horse act that will bring in the crowds. And she d better get over herself and get on with it fast; there s a traitor close to the Ringmaster who will stop at nothing to make sure she doesn't succeed.
Where to buy:
Amazon
Barnes & Noble
__
If you are interested in being featured in a future post for The Independent Voice, click here to fill out the form.
Independent Voice