By Carolyn Arnold April 29, 2011
Drowning is one cause of death that can be difficult for a M.E. (Medical Examiner) to conclude.  To determine drowning as the cause of death, other factors have to be ruled out first.
Drowning in its basic form is asphyxiation – basically the inability to breathe.  When we think of drowning, normally we associate that with water, but that’s not the only thing we can drown in.  We can drown in basically any form of liquid (even our own vomit).
There are 2 types of drowning – dry and wet.
Maybe you’re wondering how a drowning can be dry?  But, the dry part refers to water getting into the lungs.  In cases of a dry drowning, the larynx spasms shut, making it impossible to derive oxygen, or exhale carbon dioxide.  Dry drowning is more likely in salt water, than fresh.
So how does an M.E. determine a drowning has happened?
You might answer water in the lungs.  However, bodies that have been in the water a long time will have water in their lungs even if the person didn’t drown.  Also certain drug overdoses, and heart conditions can cause water-filled lungs.  With a dry drowning, there won’t be water in the lungs.  For these reasons, a M.E. will request a toxicology analysis.
If the person was conscious when they entered the water there will evidence of hamorrhaging in the sinus and airways.  There will also be evidence of debris pulled in from the water in the sinuses, and lungs.
Another method, although debated, is the examination of the bone marrow for diatoms.  Diatoms are microorganisms that are in most water sources, and if the lungs and heart are pumping, these are pulled through the blood stream, and settle in the bone marrow.  This is a controversial means of determining drowning, however, because it has been argued that samples can be contaminated or unreliable because diatoms are also found in soil and the air, and some water doesn’t have diatoms.
When a person drowns, they inhale things such as plant matter, dirt, gravel, and microscopic organisms.  The M.E. can employ the services of a botanist, or forensic chemist, to determine where the person entered the water.
The M.E. may rely more on the circumstances of the death than autopsy findings. 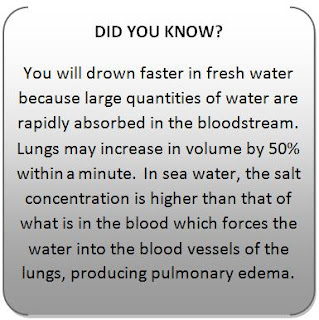 Accident
This is the most common cause of drowning.
Suicide
Suicide by drowning accounts for less than 2% of all reported suicides in the United States.
The reason for this is likely the natural tendency to surface for air.  It involves physical and mental anguish.  Some who chose this method use a heavy object to make it impossible to rise for air.
Murder
Drowning someone has been defined as “the perfect murder”, but is it impossible to prove?  No.  There are a few areas the investigators can turn to for answers.  If the location where the body went into the water shows signs of a struggle, or the body has markings to indicate an altercation, this lets investigators know they can pursue the drowning as a murder.
So, this is what I picked up from my research.  I hope you found it informative and useful.
__
For more information on who is likely to drown, when and where - click here.
Forensics Friday